Hospitals around the U.S. are suddenly struggling to keep up with surging rates of respiratory infections among children, such as respiratory syncytial virus (RSV),1 COVID, rhinoviruses and influenza.2 Hospital staff feign confusion, saying they have no idea what’s going on.

Meanwhile, censored scientists and doctors have long warned that the mRNA COVID jabs are destroying people’s immune systems, and that we’re going to see an avalanche of infections as immune system failure sets in.

Many Hospitals at or Near Capacity

As of the third week of October 2022, several children’s hospitals in Washington, D.C., Maryland, Connecticut and Virginia reported being at or near capacity.3 To expand capacity, officials in Hartford, Connecticut, are seeking help from the National Guard and FEMA.

According to Dr. Margaret R. Moon, co-director of Johns Hopkins Children’s Center in Baltimore, the hospital “is experiencing a surge of patients due to an increase in cases of RSV, as well as other reasons, and many surrounding hospitals are facing the same.”4

RSV typically causes mild cold-like symptoms that last for a week or two. While harmless in adults, in infants the virus can cause more severe infections such as bronchiolitis (inflammation of the smaller branches of the bronchial airways) and pneumonia.

According to Centers for Disease Control and Prevention data,5 58,000 children under age 5 are hospitalized for RSV each year, and the CDC’s RSV dashboard6 (screenshot below) does show that RSV is acting unseasonably. Could this out-of-season emergence of RSV have something to do with the fact that the Food and Drug Administration authorized the COVID shot for children under 5 in June 2022?7

Maybe, maybe not. It’s not a clear parallel, as RSV also rose out of season during the summer of 2021, when young children did not yet have access to the COVID shot. Parents and older siblings, however, were eligible, and there are still many open questions surrounding the issue of shedding. It’s possible that spike protein shedding from the shots were affecting younger children, suppressing their immune systems. 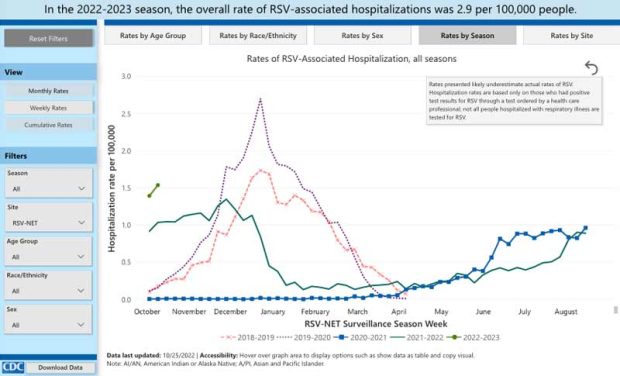 mRNA RSV Jab in the Works

Considering hospitalization rates for RSV are actually lower than historical seasonal highs, one also wonders whether the media’s attention on RSV might be related to the fact that Moderna is working on an mRNA jab for RSV, which is scheduled for release in 2023.8

They’re also working on a combination mRNA jab for COVID, RSV and the flu. Ultimately, Moderna wants to create an annual mRNA shot that covers all of the top 10 viruses that result in hospitalizations each year.9 If the COVID shot is any indication, such an injection could be catastrophic.

There’s now ample evidence showing the COVID jab causes innate immune suppression, which makes you more susceptible to all kinds of infection, not just COVID, as well as any number of chronic diseases….