The Nobel Memorial Prize in Economic Sciences was awarded to former Federal Reserve Chair Ben Bernanke and two others for their research in the 1980s on banks and financial crises. 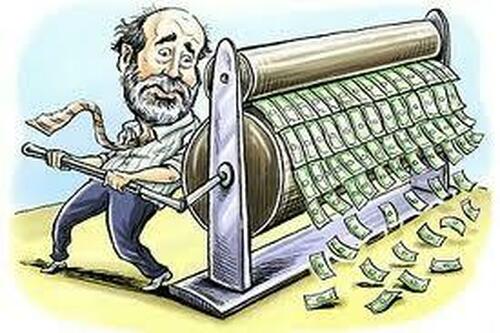 Bernanke served as chairman of the Fed between 2006-14 and famously unleashed a tidal wave of debt monetization by the central bank during the GFC over a decade ago to save the so-called ‘too big to fail’ banks. At the time, the Fed’s balance sheet was approaching $2.5 trillion. Multiple rounds of money printing later and a massive expansion during the Covid crisis, the balance sheet stands at around $9 trillion today. 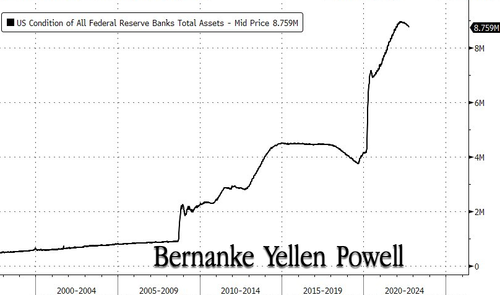 The side effects of former Fed chair Yellen and current Fed chair Powell keeping the money printers on full speed over the last decade since Bernanke is one of the main reasons for today’s worst inflationary environment in decades. And why the Fed is in panic-tightening mode today. 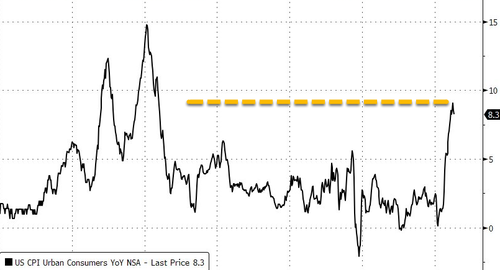 Douglas W. Diamond, an economist at the University of Chicago, and Philip H. Dybvig at Washington University in St. Louis also won the ‘prestigious’ prize alongside the former Fed chairman.

Bernanke’s analysis of the Great Depression in the 1930s showed how and why bank runs were a major reason the crisis was so long and severe. Diamond and Dybvig’s work, meanwhile, looked at the socially important role banks play in smoothing the potential conflict between savers wanting access to their money and the economy needing savings to be put into investments; and how governments can help prevent bank runs by providing deposit insurance and acting as a lender of last resort. –CNBC

The Nobel committee said their work “significantly improved our understanding of the role of banks in the economy, particularly during financial crises, as well as how to regulate financial markets,” adding their research “reduces the risk of financial crises developing into long-term depressions with severe consequences for society, which is of the greatest benefit to us all.”

The work for which Ben Bernanke, Douglas Diamond and Philip Dybvig are being recognised has been crucial to subsequent research that has enhanced our understanding of banks, bank regulation, banking crises and how financial crises should be managed.#NobelPrize pic.twitter.com/4drJwZ0yF9

The committee noted that their research was “invaluable” during the GFC and Covid crises.

“The laureates have provided a foundation for our modern understanding of why banks are needed, why they’re vulnerable, and what to do about it,” said John Hassler, an economist at the Institute for International Economic Studies at Stockholm University and a member of the prize committee.

While a decade of money printing may have avoided a “long-term depression” (for now), it certainly has had adverse side effects, such as triggering the worst inflationary environment in forty years.

Many on Twitter thought Bernanke’s award was a ‘joke’….