Once-overlooked prescient warnings, conveyed through black-and-white grainy footage, reach through history like that dead girl in Carrie. They haunt all the more forcefully given the foresight it took to make them. 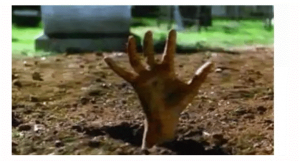 We’ve all heard of the military-industrial complex (MIC) – the escalating intertwining of the national security apparatus and the private weapons industry. It produces an irresistible economic/political incentive for reckless, endless war.

Its characteristics are unique in many ways, but in others, the MIC is merely another iteration of the essential problem of intersecting corporate and state interests — their chief mutual interest being the accumulation of greater and greater concentrations of power for themselves.

Mussolini described the phenomenon like this in the early 20th century:

“Fascism should more appropriately be called Corporatism because it is a merger of state and corporate power.”
-Benito Mussolini

The gears of private industry are lavishly oiled with public money. In turn, the public decision-makers (bureaucrats), who are theoretically tasked with acting in the public’s interests, receive innumerable benefits — both while in office and especially after leaving, including appointments to lucrative board positions, gifted stock options, etc.

Interests across the two domains (state and private sector) – which theoretically remain separate in liberal ideology — become so intertwined that distinguishing one from the other is impossible.

To set the context of the MIC’s inaugural insertion into public consciousness, in 1961, the United States had just recently risen over the ashes of war-ravaged Europe to claim the throne as the global hegemon.

The industrial-scale arms industry remained a relatively new advent, and so the MIC was largely a new phenomenon in human history. If all of its elements weren’t entirely new, the MIC was at least a new incarnation of the inherent and ancient issue of state usurpation of power by private interests for personal and in-group gain.

Eisenhower introduced the MIC into the American psyche, coining the term in his farewell address from the Oval Office:

“This conjunction of an immense military establishment and a large arms industry is new in the American experience. . . .Yet we must not fail to comprehend its grave implications. . . . In the councils of government, we must guard against the acquisition of unwarranted influence, whether sought or unsought, by the military-industrial complex. The potential for the disastrous rise of misplaced power exists and will persist.” 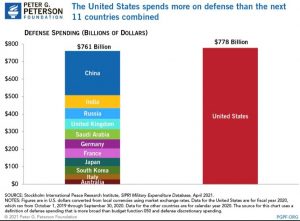 We’ve previously covered the most recent glaring example of the MIC in action – US generals dutifully crying on television about the Afghanistan pullout. Their defense industry sponsors/owners directed them to fear-monger about ending a 20-year losing war – to keep the gravy train rolling, for at least another year – and they complied.

The Afghanistan war, incidentally, produced no tangible outcome of value for any American except the defense contractors who paid Jack Keane to promote it on cable news. Defense contractors, in addition to buying spokesmen like Keane, also purchase advertising on said corporate media channel in exchange for war propaganda that favors healthy stock prices.

It’s all very incestuous, and, at the core, it’s all funded at the public’s expense via the US treasury….