Some people think that those who’ve been “vaccinated” are already dead – because they will be, soon.

Could the same be true of Volkswagen?

Well, that was tried before – though not intentionally. 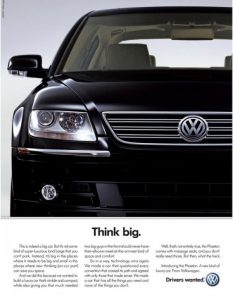 Some will recall the last attempt VW made to go uptown – back in the ’90s – when it launched the Phaeton, an ultra-premium luxury sedan with a price well beyond the means of the Volk. The problem was that those who had the means did not want a Volkswagen. Not because there is anything wrong with Volkswagen, much less the Phaeton – which was as opulent as any comparable Audi or Mercedes of the same period and in some ways even more so. But it wasn’t an Audi or a Mercedes – and therein laid the rub.

A big part of the reason why the not-volk are willing to spend das geld on a premium  vehicle is because it is a premium vehicle. More precisely stated, because it is not a wagen for the volk.

It has little to do with features and amenities or even power. It has to do with perceived status and exclusivity. It is why Toyota doesn’t sell a number of the models it makes at Toyota stores – or under the Toyota label. It sells them at Lexus stores – under the Lexus label. Hyundai recently bifurcated itself similarly. Hyundais (and Kias) for the volk – and Genesis models (and stores) for the people who have the means to avoid rubbing elbows with the volk.

The problem for VW is how does Volkswagen sell cars to those people?

The Phaeton certainly didn’t sell. It was one of the weirdest yet most predictable automotive belly flops of the past 50-plus years in that unlike, say, the Pontiac Aztec, it wasn’t ugly and unlike, say, the Chevy Vega it wasn’t a poorly built vehicle. Far from it. But it was a Volkswagen. Trying to sell a $70,000 VW like the Phaeton was kind of like trying to sell a $5,000 Timex watch. It’s well-built, it has all the features. It may even be a better watch.

But it’s not a Rolex.

VW may have to change its name to suit its changing lineup – perhaps Herrenvolk? –  in order to have any hope of appealing to the people who own Rolexes and can afford to spend “premium” money on cars.

As far as premium electric cars:

VW’s decision is a kind of admission that electric cars cannot be people’s cars. This being a function of their cost, which isn’t going down. In fact, it is going up – because the cost of everything is going up. Including the materials necessary to put together electric cars, which already cost so much more than the materials necessary to put together non-electric cars that an entry-level electric car such as VW’s ID.4 – which is a compact-sized crossover similar to a (non-electric) Taos stickers for $40,760 to start vs. $23,295 for the Taos.

In other words, twice as much (almost) for just about the same. Less, actually – given that the non-electric Taos gos 475 highway miles on a tankful vs. about half that far (245 miles) in the  ID.4.

The tragedy of this role reversal from people’s car to elitists’ car is that Volkswagen was on track to become the world’s biggest automaker, with a stated goal to surpass Toyota as number one. But then – around 2015 – the plug was pulled.

VW was becoming too successful – selling people’s cars such as its TDI diesel-powered lineup of affordable cars, ranging from Beetles and Golfs to Jettas and Tiguans – none of them costing anywhere near what an ID.4 costs and all of them going three times as far on a tankful (in some case, almost 700 miles). This constituted an existential threat to the electric car push – italicized to make the point that this has always been a top-down thing, driven by “mandates,” regulations and subsidies rather than market demand.

It had to be not just suppressed but curb-stomped.

Thus arose the sturm und drang over VW’s “cheating” on government emissions certification tests – a thing of a piece with not disclosing to the DMV how much you actually paid for the used car you just bought, so as to minimize how much in sales taxes the DMV will filch out of your pocket.

VW was pilloried as a great despoiler of the environment, though no environmental or human harm was ever adduced. It was enough that the diesel-powered people’s cars “emitted” something on the order of 0.0003 percent more oxides of nitrogen (occasionally, under conditions such as wide-open throttle).  Of a piece with it being enough to “lock down” and “mask” the entire country over a “virus” that didn’t kill 99.8-something percent of the population.

In both cases, different motives – and ends – were in play.

And that’s the underlying meaning of “the key target is not growth.”

And you just heard them admit it.